Agenda: A week in New York City. A week in Vermont, first in Montpelier for an alumni retreat at Vermont College of Fine Arts, and then at Shelburne Farms for an intensive writing weekend. If that wasn’t enough, 48 hours after I arrived home, my family and I sprinted through France for 6 days, stopping in Burgundy, Auvergne, Dordogne, Paris, and Picardy.

Desk: My middle-grade novel, waiting for critiques to come in—and for me to stop travelling and sit down and revise.

Nightstand: Stacks and stacks of books, among them: The Whole Stupid Way We Are by N. Griffin, Where’d You Go Bernadette by Maria Semple, Pie by Sarah Weeks, and Imaginary Girls by Nova Ren Suma.

To-Do List that Never Got Done: A poetry challenge given to me by a friend: Write a poem using only the left-hand-side of the keyboard. Invented language encouraged.

Mind: David Almond. I went on a David Almond kick, where I read one interview after another. Four, five . . . and then I ended up at an exchange between Rowena House and Almond, where he talks about the limitations on his creativity and imagination. I stopped here. Because I realized that I had been chasing an idea he’d been alluding to. Here, he talked about it in depth. Something opposite to what we hear so often. You know, the Quotes to Live By. Imagination is free. Imagination has no boundaries. Almond said the ‘paradoxical thing’ is that the imagination is NOT free.

Yes, yes, I know about Rousseau and all that. But Almond’s context was personal to me. He spoke about growing up in the North East of England and as a Catholic. And how he had tried to distance himself from it, but it all eventually came out in Skellig. Well, I grew up in Kansas and as a Mennonite. And I have tried to distance myself from all of that. Almond made me wonder what sort of limitations I have placed on my own imagination—what from my own upbringing might eventually inspire my writing.

Well . . . both novels I have written have ghosts and things happening that a purely rational person would never think could happen. Like Almond, I was raised quite religiously. Sundays and Wednesdays I was told stories with fresh, clear water being transformed into wine and a wife being turned into salt by a glance from her husband. Miraculous, out of the ordinary stories. So, I suppose, it’s not really that much of a surprise that as a writer, I am fascinated by the mystery and possibility of what can be. Endlessly fascinated by it.

As for what else might be waiting to surface from my upbringing, I’m still watching and waiting.

A blog about the writers and illustrators of children's and young adult literature. Here, we get to the heart of their work and lives by asking What Was on Their . . . minds, desks, play lists, refrigerators, and more.

Sandra Nickel writes books and poetry for young readers. In 2020 and 2021, she has three books coming out: Nacho’s Nachos: The Story Behind the World’s Favorite Snack (Lee & Low), The Stuff Between the Stars: How Vera Rubin Discovered Most of the Universe (Abrams), and Breaking Through the Clouds: The Sometimes Turbulent Life of Meteorologist Joanne Simpson (Abrams). Sandra’s poetry can be found in SCOOP magazine. Sandra holds an MFA from Vermont College of Fine Arts and has presented workshops on writing for children and young adults throughout Europe and the United States. Sandra has twice won the Katherine Paterson Prize for picture books.

Sandra is represented by Victoria Wells Arms of the Wells Arms Literary Agency.

A ★ REVIEW FOR NACHO’S NACHOS

“Nickel’s homage to this congenial, hardworking man and his renowned snack is a celebration of ingenuity and kismet.” 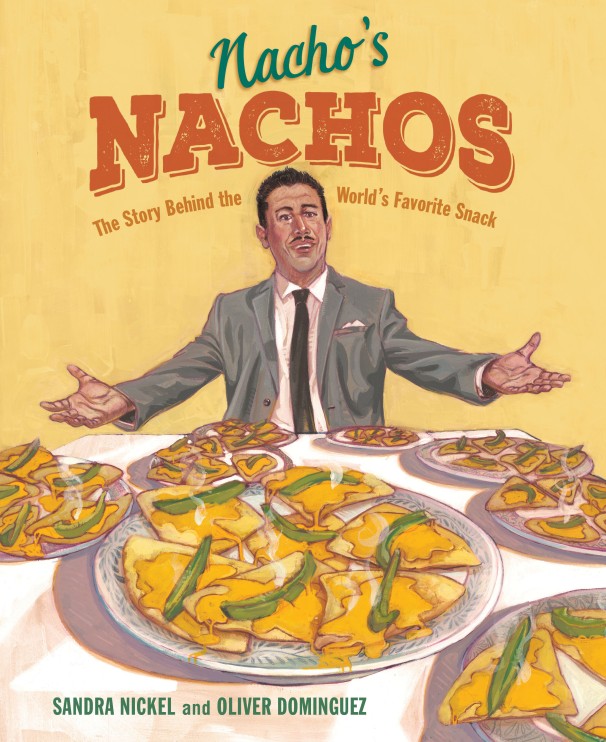 2020 is the 80th anniversary of the invention of nachos! Why not celebrate with Nacho’s Nachos: The Story Behind the World’s Favorite Snack? It will be in bookstores everywhere on August 11th!

‘The Sun Has a Secret,’ my poem about the sun falling for the moon, is in SCOOP’s 1st anniversary issue. If you haven’t yet picked up an issue of SCOOP, do. It’s a brilliant children’s magazine that counts among its contributors Neil Gaiman, Sir Tom Stoppard, Herbie Brennan, and Jacqueline Wilson.

I started thinking about antagonists when I was working on my MFA at Vermont College of Fine Arts. It wasn’t too long before I came to the conclusion that antagonists—yes, antagonists plural—were at the core of the very best stories. In fact, as I examined my favorite stories more closely, I realized that there are 13 Antagonist Archetypes, each capable of producing different reactions in the protagonist and reader. This realization turned into a presentation I gave in Amsterdam, morphed into a three-hour workshop I gave in Switzerland, and then was condensed into a breakout session for the Society of Children’s Book Writers and Illustrator’s Annual Summer Conference in Los Angeles. For those of you who missed it, you can find it here: Enter the Antagonist–no scratch that–Enter the Antagonists, Plural.

The Paris Review celebrated James Fenimore Cooper’s birthday by picking up and republishing portions of my April 30, 2014 blog–The Voracious Child Readers of Russia. If you would like to read the Paris Review’s Natty Bumppo, Soviet Folk Hero (September 15, 2014), click below. 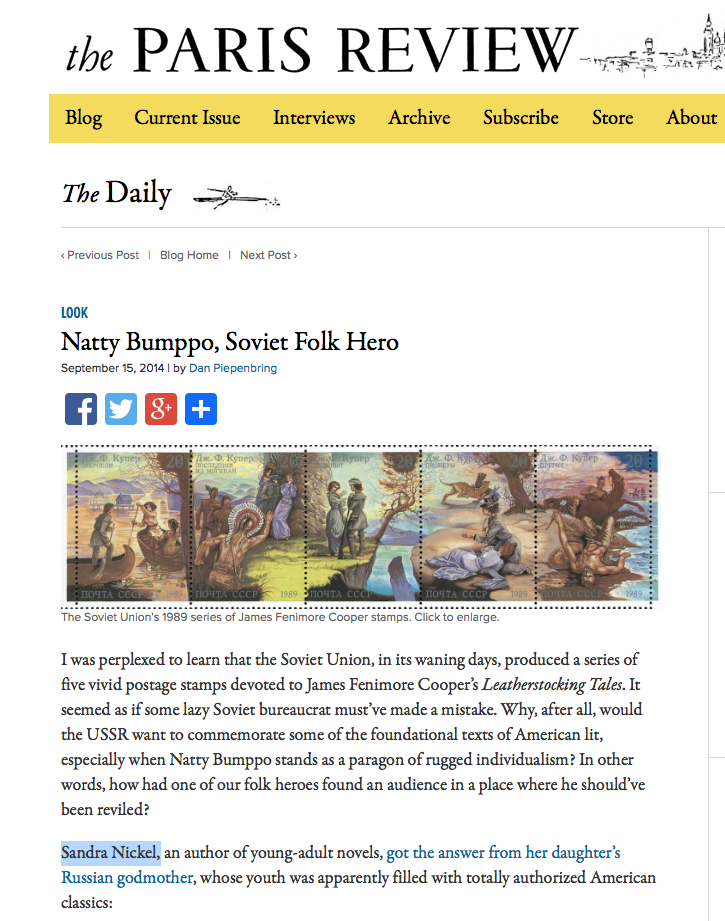 Melanie Fishbane invited me to join her series on Embodying Character, where she interviews the actors of Anne & Gilbert, a musical adapted from L.M. Montgomery’s Anne of Avonlea and Anne of the Island, all toward the end of investigating the overlaps between writing and acting.

Before taking up writing, I studied acting for three years in New York City. If you were a fan of New York’s acting scene, you might have caught me in some very dark, very serious off-off-Broadway showcases and as a nurse on The City or serving up coffee as ‘Sandy’ on As the World Turns. So, as you can imagine, I’m endlessly fascinated by the similarities between writing and acting and was thrilled to participate in Mel’s series.

You can discover the Embodying Character Series by clicking below: 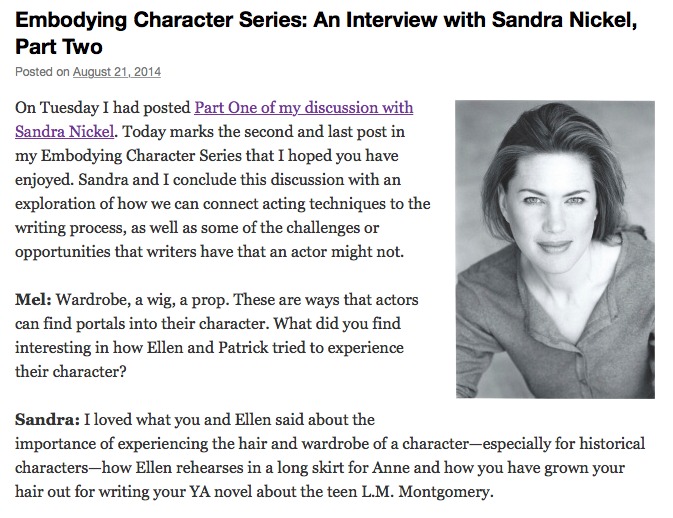